Greetings again friends! Let’s continue with God’s story about man. Again, may I wish you all the joys of Christmas, and a reward-filled New Year 2014.

The Prophet Isaiah foretold the birth of the Messiah in this way,

“For a child will be born to us, a son will be given to us; and the government will rest on His shoulders; And His name will be called Wonderful Counselor, Mighty God, Eternal Father, Prince of Peace. Of the greatness of his government and peace there will be no end.” (Isa.9:6 NASB).

The Birth of Jesus & Visit by Shepherds (Wiki Commons)

By mentioning “government” more than once we are given an emphatic message about a Messiah whose influence is universal embracing all peoples. The New Testament echo this same thought in this manner, “For God loved the world so much that he gave his one and only Son, so that everyone who believes in him will not perish but have eternal life.” (John 3:16, NLT) It is not a message about a narrow religious sect, but a worldwide Government or Kingdom which has jurisdiction over territory and people. The Kingdom of God is God’s Government that has reign over political and spiritual boundaries. Hence, the world is given a Messiah who carries the title of “King of kings, and Lord of lords.” (Rev.20:4-6) God’s ultimate purpose of recreating His Loving nature in man is so people from all nations will become His Kingdom of kings, lords, and priests. So, the birth of the child Jesus, the giving of a Son, the provision of a Messiah, is not just for a religious sect one calls Christianity, He is given to unite all people and impact all mankind beyond borders, beyond religion, beyond any political persuasion, racial differences, and any wall of division. God gave Him for a universal purpose in which His Love unifies the whole world as He himself is One in His Triune Being.

Answering ‘Why’ and ‘What”

But let’s come back and continue from where we left off in part one on this message of the purpose of Christmas, and the Messiah’s birth. The essential prerequisite to the Messiah’s universal impact is the fulfilment of God’s underlying purpose of recreating His people in “His image and likeness.” Nothing happens until that change takes place in the heart and being of humans. We have seen His image is Love, when we answered the question, Why? And we have seen His likeness is Trinitarian, when we answered the question, What? All of the above is predicated on mankind being transformed from his fallen, fearful, and corrupt existence inherited from Adam, and freely adopting the image of God’s Triune Love in His Son, whose birthday we celebrate at Christmas. So, now we answer the question, How will God make this transformation possible in man?

How…. will God make possible man’s transformation into His image of Love and the likeness of His Triune nature? Think of who God IS for a moment. He is the most holy God, all righteous, sovereign, all-powerful, omniscient, omnipresent, Loving Triune Being. He is the most awesome Spirit Being who have existed eternally without beginning, without end, whose sovereign Being occupies all space and time. There is no other god besides Him. Our limited, inadequate, imperfect, physical mind will never be able to grasp nor comprehend Him. What we know about God is what He has revealed Himself to us and given us minds to comprehend. Without His revelation and the mind and faith to comprehend and be convicted, we would remain ignorant of His attributes and purpose. When we look into the living universe with our mighty telescopes, the creation we see and the feel of this earth, awesome as they are, yet it all still remain utter mysteries to man. Even with the human mind, we are at a loss to explain how it works. We don’t know if we are the result of untold years of evolutionary process, or we are created beings. The question of human origin still baffles us. As we think more and more deeply about all of creation we come up with more questions than answers. Yet, there is a God who is the creative first cause of the universe we can’t explain. And He did all that out of His Love. 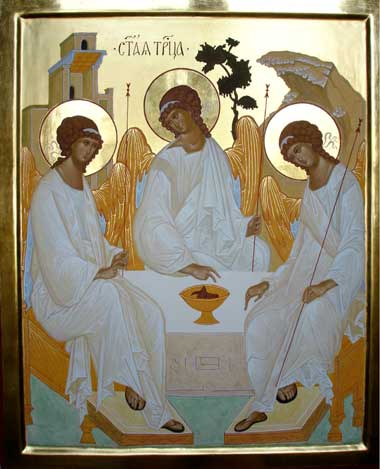 Man – Made in The Likeness of The Trinity (Wiki Commons)

Now, this is the God, who, in all His unfathomable mystery, said from the beginning, He wanted to make man into the image and likeness of His Love in His Tri-Personal Being. How does man become like someone who exists in all His unknowable mystery, let alone comprehend and have some semblance of communication and relationship with which to begin? The Scriptures tell us He is utterly holy, and conversely, we are utterly depraved and unholy. Despite His mystery, He has given us minds to comprehend the essentials to sustain a relationship with Him. We were made with that potential in our minds. And it is not as hard as we assume all the mystery about Him suggests. We will go to our death beds never knowing all the answers to the mysteries of this world, but He has ensured humans can have a complete, fulfilling, and lasting Loving relationship with Him and with each other.

How will God’s “likeness mandate” be made a reality in man? How does He do it in this seeming impossible situation in man? Man has no alternative but to seek His answers. What is His answer? It has to take Someone from within the Tri-Personal Godhead who is a co-equal Being with the Father and the Spirit, to become human, and glorify our humanity in Himself, and forever unify man to the Triune God for eternity. When you think about it, it cannot be any other way. It is simple, it is awe-inspiring, it is something the prophets of old had wanted to peek into the wisdom of God. Man is helpless, so God Himself has to provide answer. Hence, we read of another passage about Christmas and the birth of Jesus in this way,

“Therefore the Lord Himself shall give you a sign, Behold a virgin shall conceive, and bear a Son, and shall call His name Immanuel” (Isa.7:14).

“Behold, a virgin shall be with child, and shall bring froth a Son, and they shall call His name Emmanuel, which is being interpreted, ‘God with us’” (Matt.1.:23).

That Someone from the divine Trinity is Jesus, God’s own Son. He is the Immanuel who has fulfilled God’s purpose in the divine mandate of unifying God’s image with man. Jesus became man, so man can take upon himself God’s Loving Triune image. Man is transformed from his “solitary” image in himself, to the “Triune” likeness of God in Christ. Jesus becomes man’s Mediator and High Priest inside the Triune Life of God having taken our humanity, perfected and glorified it in Himself, and took us with Him into the heavenly abode of the Triune God. By expressing this impossible and unimaginably Love for man,  through Jesus man can now miraculously respond adequately, perfectly, and completely in Love to a God who is all-holy in his Being.

How did Jesus do it? a) He was born to Mary as the prophesied Messiah in Bethlehem. b) He lived a perfect sinless life teaching the Gospel. c) He overcame the devil in the temptations. d) He was crucified to cleanse man from all sins past, present, and future. e) He resurrected in His glorified human body. f) He ascended and unified man’s humanity to the Triune God forever. That is the greatest story told about man – it is God’s story about man. Let’s now answer the question When? When does all this happen in man? When does this all this start for man?  We’ll answer the When in God’s story of man in our next segment.

* The “Bula man-river” is the metaphor describing the union of man with the Love of the Triune God flowing in humans, making possible the “Triune Life” – the source of the miraculous life in man. To read the many facets of life of the Bula man-river, go to my website www.bulamanriver.com where you can order a copy of my Book.

72 thoughts on “CHRISTMAS – 3 PURPOSES FOR THE MESSIAH’S COMING, PART 2 By KIANG P LEE”