“You too must continuously consider yourselves dead as far as sin is concerned, but living for God through the Messiah Jesus” (Rom.6:11)

What does “Counting yourself dead to sin…” mean? This statement is a declaration of faith of the Christian which is taken from Romans 6:11. The verse has a second part to it which is utterly profound for it ends this way, “but alive to God in Christ Jesus.”  It is an interesting and deeply profound statement of faith for the believer. It is telling the believer to conceptualize and live the reality of his/her present life for trusting in God’s provision for the Redeemer in His Son. “Dead to sin” means sin has no power over you, because you now stand under the cross of Jesus which has power over sin. The verse tells you to accept this as the truth of your present condition because of your faith in Jesus. Everything hinges on the person’s faith. If you do not believe, you remain in your sin, meaning, sin’s power still holds you in its clasp. You are not free, but remain a spiritual slave to sin.

Faith is a powerful motivator in human life. Every human endeavor you can think of in the wide historical spectrum of man’s achievements could not have been possible without faith. Think about it, would man have landed on the moon if the people involved with that endeavor did not believe it can be done? No, if there was no faith, they would not have started to begin with.  Faith is the first step towards any endeavor. Faith opens the door of reality to enter and change our lives. This is more so true in the spiritual sense because faith is what keeps the spiritual world alive and in motion. How else can one experience the unseen (spirit) except through faith? Hence, the Bible states emphatically, “Without faith it is impossible to please God, because anyone who comes to Him must believe that He exists and that He rewards those who earnestly seek Him” (Heb.11:6).

Let’s come back to the passage we are discussing in Romans 6:11. It is interesting that Paul uses the word “dead” and “death” in the verses surrounding this passage to convey a vital truth about human spirituality. Earlier he said, “For if we have been united with Him in a death like His, we will certainly also be united with Him in a resurrection like His” (Rom.6:5). From this we understand what it means to be “dead to sin.” Jesus’ death on the cross as the perfect, sinless, sacrifice was the price God paid to save man from the human sin condition. For Paul later said that “The wages of sin is death” (Rom.6:33).

So, Jesus died to sin, or sin took Jesus’ life, so sin will lose its grip and death has no power over man. To be “united with Him in death like His” is to vicariously die His death with Him, so that just as God resurrected Him to glory, “we are certainly united with Him in His resurrection.” That is to say, if in Jesus’ resurrection He is perfect and sinless (and He is), then we are too, because we stand vicariously with Him in His glory. He embraced our humanity and glorified it in His eternal deity (Immanuel). Here is the real issue, where the rubber meets the road, do we believe what the scriptures say? It takes a living faith, not an ordinary vacillating human faith, to live in this reality Paul speaks of in Romans.

Thus, Paul speaks of living faith in this way,  “I have been crucified with Christ and I no longer live, but Christ lives in me. The life I now live in the body, I live by faith of the Son of God, who loved me and gave himself for me” (Gal.2:20). Obviously, there are two faiths, our human faith which is inept in the spiritual world, and the faith of Jesus which  brings God’s reality into our mundane human life. Both are essential, for we use our human faith to trust in the living faith of Jesus. 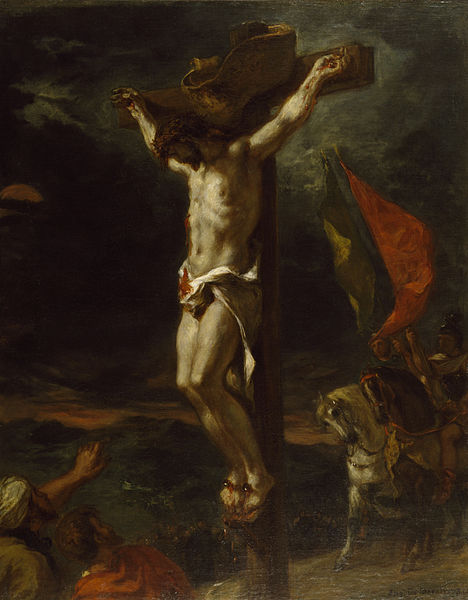 Paul goes on to say, and note how often the word ‘death’ is repeated, “For we know our old self was crucified with Him so that the body ruled by sin might be done away with, that we should be no longer slaves to sin because anyone who has died has been set free from sin. Now if we died with Christ, we believe that we will also live with Him. For we know that since Christ was raised from the dead, He cannot die again; death no longer has mastery over Him. The death He died, He died to sin once for all; but the life He lives, He lives to God” (Rom.6:5-10). What a life we are given to have in Jesus – perfect and holy like His Son so we can enter into the presence of the Father and share in their relationship of Love they had from eternity. (John 17:24b)

One might say, but how can this glorious life be my reality when I am a human and a sinner. Here is the issue: there is a human way of looking at ourselves, and there is the way that God looks at us through His Son whom He has surrendered for our everlasting redemption. God says to us, “You are complete through your union with Christ” (Phi.2:10). So, now it comes to a matter of faith if we will believe God’s word for us, or we believe our own words over His.

If you have questions, please don’t hesitate to write to me in the space provided below, or email me on bulamanriver@gmail.com.

Until we meet again in my next post, may the blessings of the God who ceaselessly expresses Himself in His dependable Triune Love, be with you always. May the Spirit enliven your spirit and make all things concerning you possible as you live the “Triune Life” as a  Bulamanriver.*  Be strong in the Lord’s joy.